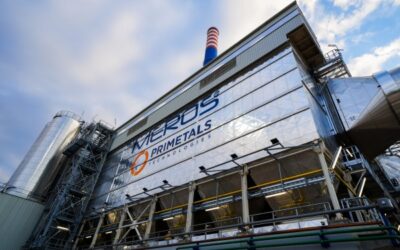 Recently, the third MEROS plant implemented at Acciaierie d’Italia’s sinter plants in Taranto, Italy was started up by Primetals Technologies. The steel producer has ordered a total of seven MEROS plants, four at the sinter plants and three at power plant No. 2. Construction work for the remaining four plants began in September of 2022.

“We are very satisfied with the performance of the three implemented MEROS plants. In terms of sustainability, MEROS is a key technology for us, and we look forward to completing the program with the further four MEROS plants,” says Alessandro Labile, Plant Director at Acciaierie d’Italia in Taranto.

An off-gas cleaning plant, MEROS removes almost all potentially harmful substances in waste gases coming from, for example, sinter plants or power plants. At the site in Taranto, the results speak for themselves: the three implemented MEROS plants are reducing dust emissions from the two sinter plants to less than 3 milligrams per cubic meter – significantly below the legal limit of 10 milligrams. In addition, the dioxin levels are less than 0.01 nanograms per cubic meter, far below the level of 0.15 nanograms required by the Italian law.

“Thanks to our highly efficient MEROS technology, the air quality in Taranto has improved immensely. It is an important project that reflects both the profound positive impact this technology is having on the environment, as well as our long-lasting and strong partnership with Acciaierie d’Italia,” says Dr. Alexander Fleischanderl, Head of Green Steel and Senior Vice President at Primetals Technologies.

During the MEROS process, dust from the sinter plant is treated in a series of steps in which dust and potentially harmful metallic and organic components are removed. As a result, the amount of recirculated dust is minimized, which results in fewer filter pulse cleaning cycles and less compressed air consumption. Therefore, MEROS is a highly energy efficient plant.

Acciaierie d’Italia is a joint venture of ArcelorMittal and the Italian National Agency for Investments Attraction and Business Development, S.p.A. – Invitalia, with around 10,000 employees and an annual production of approximately four million tons of steel in 2021.

MEROS is a registered trademark of Primetals Technologies Austria GmbH in certain countries.