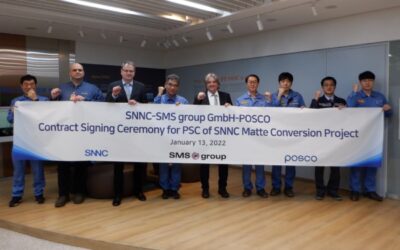 Signing of the contract between SNNC and SMS group GmbH for the delivery of a Peirce-Smith converter (source: SMS)

Electro mobility and the transition to green energy are only possible with the development and application of highly efficient battery technologies. The nickel content of these high performance batteries is steadily growing. Most of this nickel and nickel sulfate is produced by refining ferronickel, which is commonly produced in submerged arc furnaces.

SMS group has received an order from SNNC  ̶ a joint venture between SMSP and POSCO  ̶  in South Korea to supply a Peirce-Smith Converter (PSC), in which the ferronickel from the Gwangyang plant will be converted to nickel matte (a nickel-sulfite phase) to lower the iron content. The nickel matte is then hydrometallurgical processed into nickel and nickel sulphate in POSCO’s neighboring battery plant. The Peirce-Smith converter to be supplied by SMS is one of the key units in this overall process chain and converts the ferronickel into high-quality nickel matte using special underbath nozzles and a liquid sulfur injection system.

In 2011, SMS delivered the world’s largest submerged arc furnace for the production of ferronickel to SNNC in Gwangyang, South Korea. In addition to the PSC, SMS will supply the liquid sulfur injection system, the design and engineering of the off-gas hoods, as well as the metallurgical process. According to SMS, this technology will set new standards in nickel production for the growing battery market. The plant will go on stream in 2023, and SNNC plans to produce 21,000 tons of nickel per year by this project.