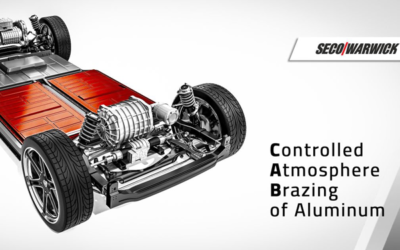 15.06.2021. CAB technology leader Seco/Warwick will modify the equipment in operation at an Asian customer serving the automotive sector. This is a continuation of a 2018 project, which involved the delivery and commissioning of a controlled atmosphere brazing line.

The expansion of the CAB line comes as a result of an increase in orders to produce battery coolers for electric vehicles that the Chinese plant has received from the automotive sector. After two years of intensive operation, the existing line has to undergo a major expansion to increase its production capacity.

Piotr Skarbiński, Vice-President of Aluminium & CAB Products Segment, Seco/Warwick: “This is not our first project for this manufacturer. Back in 2010, we modified an AFC CAB line which was transferred to China from abroad. It was one of our first large-scale modernisation projects and it was a success. The furnace, which is now eleven years old, is still operational and performing perfectly. Just three years later, we had an opportunity to work together once again. We sold a brand-new CAB line at that time, and now three years later we upgraded it so that the plant could continue to grow.”

The automotive industry and Seco/Warwick

However, this was not the end of a successful collaboration between the two companies. In 2018, the customer purchased another CAB line, and two years later Seco/Warwick received an order for modernisation that was intended to once again increase the customer’s production capacity. The production of battery coolers for electric cars is growing at a staggering rate, along with the growing demand for electric and hybrid vehicles worldwide. This has to do not only with the development of this technology, but also with the recently introduced restrictions on emissions.

Seco/Warwick, one of the innovators in the field of CAB brazing technology, is working closely with the automotive industry to provide solutions that help to further develop the technology for manufacturing electric vehicles.

The key to the success of Seco/Warwick’s CAB line is the perfect temperature uniformity across the entire belt width. The system offers an additional innovation in the form of a unique design of the curtain sections and cooling chambers and a special design to prevent the deformation of long battery coolers. The entire project is the result of the collaboration between Seco/Warwick and the largest global automotive industry organisations.