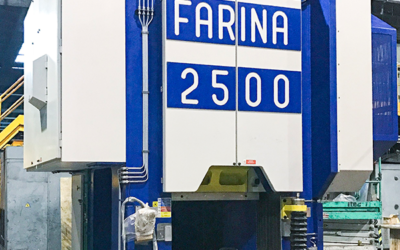 13.09.2021. Every year, the Italian company San Grato produces around 10 million forged parts for cars, motorcycles, industrial and commercial vehicles and agricultural machines. Many of them are made on seven Farina presses with press forces between 1,000 and 5,000 t at the company’s sites in San Carlo Canavese (Torino) and Malonno in the province of Brescia (North-West Italy). Now, San Grato has ordered machine number eight from Schuler affiliate Farina.

The 2,500-t-machine features a kinetic energy recovering system (KERS) which reduces the power demand by 40 %. In order to counter foreign competitors, San Grato also already covers two thirds of its energy cost by its hydroelectric power station located close to Torino and a photovoltaic system installed on the roof of both plants. Because of its energy efficiency, the new Farina GLK 2500 press will further increase in the Group. At the same time, it also offers an increased output and reduced maintenance costs.

San Grato was founded by Mr. Eligio Fresia back in 1961 in the Piedmont region. In the 1980’s, a new production site was opened at Malonno. Over the years, the company has implemented several solutions in the field of digitalisation and the Industrial Internet of Things, and has also installed Cross Wedge Rolling equipment. In 2014, San Grato, pursuant to the strategy of verticalisation of its process, bought a machining company located in France – SGF. In 2017, San Grato joined the Lightweight Forging Initiative.