NOXMAT is celebrating its 30-year anniversary 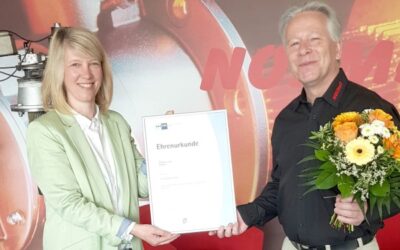 NOXMAT GmbH is celebrating its 30-year company anniversary this year. Founded in 1992, the company has been growing continuously in a very competitive international environment. For always remaining in Saxony, NOXMAT was recently awarded an honorary certificate by the Chemnitz Chamber of Industry and Commerce. In late June, the official ceremony for the 30-year anniversary will take place at the NOXMAT plant in Oederan.

Since its foundation in 1992, NOXMAT has stood for state-of-the-art burner systems, which are developed, manufactured, and produced in Oederan. Research and Development thus play an especially important role. At the in-house “Technikum”, technological innovations are developed and tested for marketability. Over the last few decades, this has helped NOXMAT become one of the specialists for industrial heating technology. The product spectrum includes, among other things, recuperator and high-speed burners, control units for burner technology, and radiant tubes for the heating of industrial furnaces. NOXMAT products are used in the heat treatment of metals in thermal processing plants.

NOXMAT supports its customers in over 35 countries all over the world with great expertise and extensive services in the construction and optimization of heating elements for these plants. The company also has subsidies to represent it in China and India. So far, the market has been dominated by gas heating technology, but it is increasingly being complemented by or replaced with electrical heating and alternatives, such as hydrogen-powered heating systems. Soaring energy prices and initiatives to reduce our CO2 footprint play an increasingly important role when it comes to retrofits, maintenance, and modernization of plants to increase their energy efficiency. For over ten years, NOXMAT has been offering everything from production to commissioning to preventative maintenance as a one-stop service.

Matthias Wolf, CEO of NOXMAT GmbH, confirms, “We are continuing to put an even more concrete focus on products that conserve resources and come with as small a burden of pollution on humans and nature as possible. Our customers value our advanced technological skillset and the service availability of our staff. Together, we can thus face the future with confidence.”

NOXMAT received the IHK honorary certificate for its 30-year anniversary. Matthias Wolf accepted it from Dr Cindy Krause. She is CEO of the Chemnitz Chamber of Industry and Commerce – Regional Chamber Central Saxony.