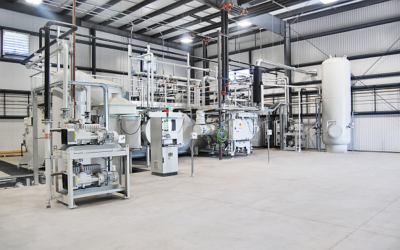 03.08.2021. Nitrex’s Aurora commercial heat treat facility is now in the hot testing phase of its newly installed low-pressure carburising (LPC) and vacuum system. It is expected to start production in September.

Expanding the production at its Aurora plant

Back in April of 2020, Jason Orosz, President of Nitrex Heat Treating Services, announced that the company was expanding the production at its Aurora plant. This is located just west of Chicago in Illinois, USA. The investment focused on adding a fourth building on the property to house a new LPC system and secondary heat-treating equipment.

“We had to build and install this during Covid, so it obviously slowed things down,” says Mark Hemsath, Vice President – Sales, Americas. These additions will strongly help in solidifying Nitrex’s position in the carburising and vacuum heat treatment market in the Chicago area, he assesses. “This is a significant investment for our Illinois facility and it basically duplicates the system we have in Franklin, Indiana.”

As Nitrex’s biggest carburising, hardening, and carbonitriding facility among its North American heat treating service centres, the Aurora plant needed to expand its carburising capacity, according to Mark Hemsath. This expansion and the new equipment aim at increasing production capacity to the facility on the one hand. It also modernises its heat treatments in order to make it a world-class vacuum hardening, vacuum carburising, and quenching facility.

The new furnace system “uses transfer shuttles to maximise the use of the two quench options (oil quench and high-pressure 20-bar gas quench). We have the ability to add many more heating chambers to more than double our capacity easily. This means we can continue to grow quickly with minimal future investment,” Mr. Hemsath explains.

“We also have good vacuum processing capability in Aurora, and this new installation allows us to perform a wider variety of tool steel projects. Combined with some of the country’s largest nitriding/ferritic nitro-carburising (FNC) capabilities, Aurora is definitely the showcase of our facilities in North America as a full-service heat treater.”

Some advantages of the LPC system include the fact that there is no intergranular oxidation and no surface decarburisation. Also, the system’s higher temperatures will lead to shorter cycle times, making the carburising process faster, more exacting and cost competitive, especially for longer term program production parts.