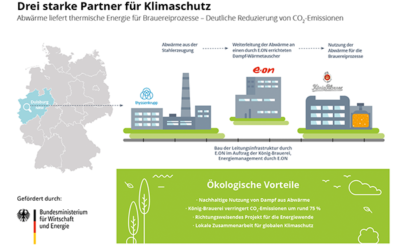 28.06.2021. Three companies based in the Rhine and Ruhr region in Germany are launching a climate protection project. Their plan is to conduct industrial waste heat from thyssenkrupp Steel’s plants to König-Brauerei through a new steam transfer pipeline managed by E.ON, thus providing the thermal energy required for the brewery processes. To this end, waste steam from the steel production from thyssenkrupp Steel’s power station is to be used. E.ON will build the pipeline infrastructure and be responsible for energy management. The three companies have signed an agreement on long-term cooperation. The project is funded by the German Federal Ministry of Economics within the framework of the Energy Efficiency Competition.

Since the end of 2020, Bitburger Brewery Group, to which König-Brauerei belongs, has already been brewing beer in a climate-neutral manner at all of its sites. This was achieved mainly by avoiding and reducing emissions. The remaining emissions which are technically still unavoidable are compensated. “In future, König-Brauerei will reduce the remaining CO2 emissions by about 75 % by covering its energy requirements with waste heat”, says Jan Niewodniczanski, Managing Director of Technology and Environment of Bitburger Brewery Group. The special aspect is that all brewery processes requiring energy in the form of heat, will become 100 % emission-free. Jan Niewodniczanski: “This massive reduction of emissions will make König-Brauerei one of the most sustainable breweries in Germany“.

The project is also a pioneering approach for Germany’s biggest steel producer thyssenkrupp Steel. “Think globally, act locally“, says Arnd Köfler, Head of Production Operations of thyssenkrupp Steel. “This is a project which has been developed in our neighbourhood and with which we contribute to climate protection locally. König-Brauerei, a medium-sized partner located in the vicinity of our plants, could become a role model. Together, we have thought beyond company boundaries. We are pleased that part of our waste heat will be used in this innovative way“.

For E.ON, the project is groundbreaking. The energy company takes over the waste steam from thyssenkrupp Steel, builds a new pipeline to the brewery and thus creates the necessary infrastructure for the project: “We are very pleased that we have been chosen as energy partner for this project”, explains Karsten Wildberger, member of the Management Board of E.ON responsible for customer solutions. “Together, we are launching a showpiece CO2 reduction project developed by three long-established companies for the city of Duisburg and the Ruhr region. This is a pioneering project for the energy transition and an impressive example for improved sustainability by means of integrated energy management. This makes the energy transition locally visible”.

The starting point for the cooperation is thyssenkrupp Steel‘s power station in Ruhrort as part of the steel company’s integrated energy network. Steam is fed into this pipeline system by various producers, such as the steel mills. Part of this waste heat can now be reused and be conveyed to König-Brauerei through a new pipeline. E.ON is the energy partner in charge of building the pipeline infrastructure. Emschergenossenschaft provides a plot of land where the transfer station to thyssenkrupp will be erected. The steam from König-Brauerei will be taken over and used as process steam in the plants. Now that the agreement has been signed, the next step is the construction of the pipeline infrastructure and the erection of a new steam conversion plant at König-Brauerei. The start of the new energy supply of the brewery is scheduled for spring 2022.