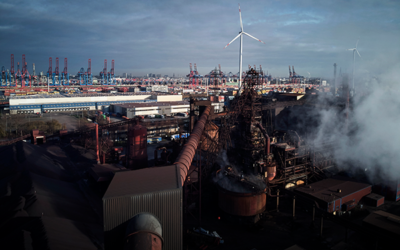 Both the German Federal Government and the European Union want to support high-profile projects in order to lay the foundation for a strong hydrogen economy in Europe. In a first joint effort, the Hamburg Hydrogen Network has submitted an application under an EU-wide support program. 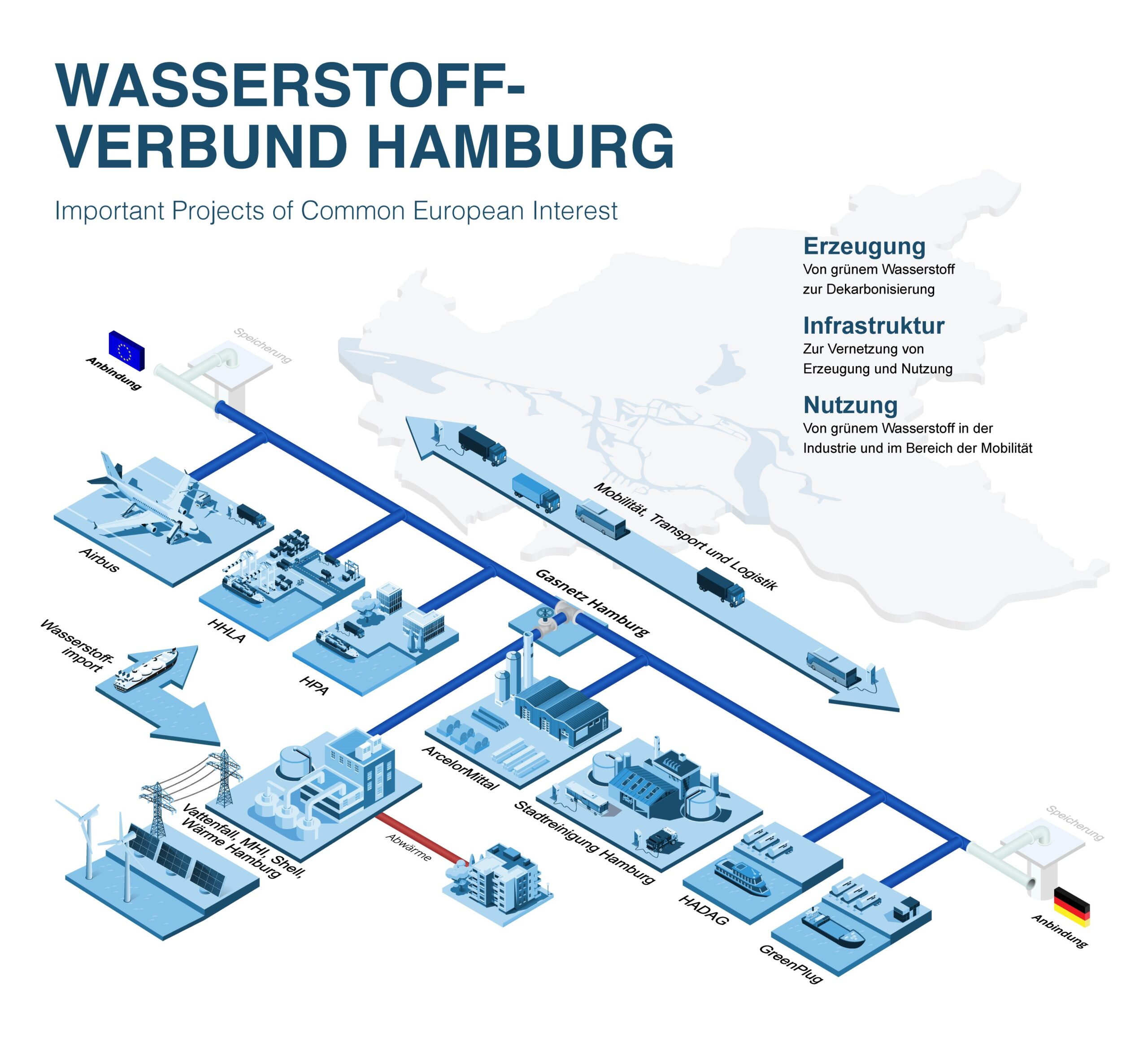 The network’s projects, linking hydrogen production, distribution and utilisation across a range of applications, will contribute to significant emission reductions. Already as of 2026, the network partners’ projects could reduce CO2 emissions in Hamburg by 170,000 t/a. Thanks to local electrolysis, sea-side imports and connection to the emerging European hydrogen network, the Hamburg Hydrogen Network has the potential to reduce Hamburg’s current 16 million tons in CO2 emissions by more than 1 million t/a by 2030.

The green hydrogen produced by the Hamburg Green Hydrogen Hub primarily would replace fossil fuels in industrial production as well as in the transport and logistics sector. The additional utilization of the waste heat from the electrolysis for the district heating network and the thermal treatment of municipal waste would reduce the environmental footprint of a variety of industries even further.

The planned conversion of a coal power plant in Hamburg-Moorburg into a scalable 100-MW-electrolysis plant for the production of green hydrogen from renewable energy, is seen as the foundation for building a complete hydrogen value chain in Hamburg. The Port of Hamburg, with its wide network of potential industrial applications and service partners, offers a unique location-specific advantage to creating a viable hydrogen economy.

In addition, the network should produce a variety of positive spillover effects throughout Germany and across Europe. It is already closely linked to other activities among Germany’s northern neighbours. International cross-border collaboration will be pivotal to the creation of a viable European hydrogen economy that includes renewable energy and hydrogen production facilities, integrated infrastructure and distribution as well as a variety of demand generators from heavy industries to road, rail, water and air transport.

The application submitted by the twelve companies to the EU-wide “Important Projects of Common European Interest” (IPCEI) funding program represents nine complementary projects to achieve this objective – all in the vicinity of the Port of Hamburg. Financial support by the Federal German Government under the IPCEI program is necessary to implement this landmark interconnection project and close the price gap between green hydrogen and fossil solutions.

The nine projects are:

The companies Shell, Mitsubishi Heavy Industries (MHI), Vattenfall and municipal company Wärme Hamburg are planning to jointly produce hydrogen from wind and solar power at the Hamburg-Moorburg power plant site and utilize it in its vicinity. In addition to the construction of a scalable electrolyser with an initial output of 100 megawatts, the further development of the site into a so-called “Green Energy Hub” is planned. “The establishment of an electrolysis facility to produce green hydrogen on the site of a decommissioned coal-fired power plant is a prime example of how the transformation of fossil-fuel production sites can be achieved at
other locations in Europe,” agree Fabian Ziegler (CEO Shell Deutschland), Oliver Weinmann (Geschäftsführer Vattenfall Innovation GmbH), Kentaro Hosomi (Chief Regional Officer EMEA Mitsubishi Heavy Industries) und Christian Heine (CEO Wärme Hamburg).

Airbus’ ZEROe aircraft concept is a fundamental contribution to global climate goals and aims to reduce emissions from aviation in a sustainable manner. The concept of “Hydrogen for the infrastructure and production of aeronautics in Northern Germany” (WIPLiN) provides that, in addition to the construction of a hydrogen-powered aircraft prototype, the development of hydrogen infrastructure will be promoted. “For Airbus, hydrogen is a key technology for the aviation industry of the future. This is not only about the propulsion of aircraft, but also about the infrastructure of our production site. We are one of the largest employers and industrial companies in the Hamburg region. This is why the expansion of the hydrogen industry network and further electrolysis capacity are important for us,” says Dr. André Walter, Head of Airbus Commercial Germany.

Through its production of green steel, the company aims to make a significant contribution to reducing CO2 emissions in the supply chain as part of the H2 for Hamburg (H2H) project. ArcelorMittal’s Hamburg plant will be converted to climate-neutral steel production in four steps by 2030 as part of the H2H project. These include the construction of a hydrogen-powered demonstration plant for the direct reduction of iron ore (H2First) and the technological upgrading of the existing direct reduction plant (H2Ready) to replace the long-term use of natural gas with green hydrogen. “In order to ensure the supply of green hydrogen, we rely on the local hydrogen industry network and a significant proportion of hydrogen from the Hamburg Green Hydrogen Hub,” comments Dr. Uwe Braun, CEO ArcelorMittal Hamburg.

By 2030, the company plans to build a supply-safe infrastructure for the hydrogen needs of Hamburg’s industrial sector and its national and European network through the project “Hamburger Hydrogen-Industrie-Net” (HH-WIN). Hydrogen infrastructure is the central link connecting all of these projects. The project will be developed and implemented on a demanddriven basis and in stages. “It is our declared aim to create the possibility for Hamburg’s industrial companies to replace their current gas needs with climate-neutral green hydrogen. Thanks to local electrolysis, sea-side imports and the connection to the emerging European hydrogen network as well as the neighboring North German hydrogen production centers, our hydrogen network will be able to replace about 570 million m³ of natural gas per year and thus save 1.2 million t of CO2,” says Christian Heine, Managing Director of the Hamburg gas network.

Through its „H2 Schubboot“ (H2SB) project, the company has designed an emissions-free pusher boat with the power to move 2,400 t at a speed of 10 knots. The propulsion system consists of pressurized hydrogen storage tanks and fuel cells with buffer batteries that drive the ship’s propellers via a direct current network. As the first step of this project, GreenPlug plans to build and test a pusher boat. Subsequently, it will build a further nine boats and charter them to operators. “This innovative project will strengthen the market in the design, construction and operation of ships for inland waterways, especially for those using hydrogen and fuel cell technology. We will buy green hydrogen as soon as it is available,” says Dr. Agnus Cassens, CEO of GreenPlug.

The port and logistics company HHLA (Hamburger Hafen und Logistik AG) plans to put various types of fuel cell heavy-duty vehicles into operation at its terminals in Hamburg (Straddle Carrier, trucks, terminal tractors, forklift trucks, empty container handlers and a shunting locomotive). “If the project is successful, we see the potential to apply the experience from Hamburg widely at our other German and numerous European sites in order to make a significant contribution to the decarbonization of European logistics,” says Lars Neumann, Director Logistics, Strategy and Business Development, Hamburg Hafen und Logistik AG.