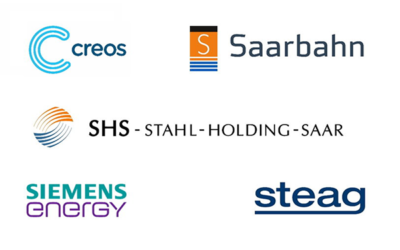 31.05.2021. The project proposal jointly supported by six companies with the aim of establishing a green hydrogen economy in the Saarland, France and Luxembourg scores a first, important success. Federal Economics Minister Peter Altmaier announced that the project proposal had successfully passed the first selection round. The project is now invited to participate in the second phase, the so-called “match making” at the European level.

A drop of bitterness was the announcement that the Saarbahn project component will, for the time being and within the framework of the IPCEI selection procedure, remain without a positive decision. However, when asked, the Federal Minister of Economics, Peter Altmaier, stated at the press conference that this in no way meant that this part of the project would remain entirely without funding. Instead, talks were underway with those in charge in order to find alternative solutions.

The six partners see this overall good news as a confirmation of their joint approach to establishing a hydrogen economy in a cross-border European network: “The decision shows that we are on the right track when it comes to hydrogen,” says Jens Apelt, Managing Director of Creos Deutschland GmbH. Especially the cross-sectoral combination of hydrogen production, transport and use for the decarbonization of industry and mobility was a big plus of the joint project. “This is why the project partners are also counting on a solution being found for the part of the project concerning the Saarbahn public transport provider, because the positive aspects of the project network result precisely from the cross-sectoral interaction of the individual sub-projects,” Jens Apelt says. The principle that the whole is more than the sum of its parts applies here.

SHS: Important signal for the future of green steel

“We are pleased that the IPCEI project ‘H2Syngas’ submitted by SHS – Stahl-Holding-Saar has cleared the first hurdle in the funding procedure and is now being considered at EU level. With the innovative ‘H2Syngas’ technology, the SHS Group with its companies Dillinger and Saarstahl is taking the next important step on the way to CO2-neutral steel production and further reducing its CO2 emissions,” says Jonathan Weber, Managing Director of SHS – Stahl-Holding-Saar and COO of Dillinger and Saarstahl.

For the further procedure leading to a notification for the selected projects, i.e. the EU Commission’s approval under state aid legislation, the partners are counting on the joint project continuing to convince with its transnationality and diversity on the offtake and consumption sides. “After this decision, we are more convinced than ever of the joint development perspective,” says Dr. Ralf Schiele, STEAG’s Director responsible for Markets and Technology.

The decision announced today comes with the hope that the further decisions will be taken in the near future, especially as regards the prospective alternative funding for the Saarbahn project part, so that the partners can start working on the implementation of the project as soon as possible. “We’re in the starting blocks. The sooner we know about it, the sooner we can get down to implementing the project. And the sooner it is implemented, the sooner the Saarland, which is so rich in tradition as an energy location, will benefit from this pioneering project not only economically but also ecologically thanks to the avoided CO2 emissions,” explains Ralf Schiele. For Saarland, this means nothing less than the chance to establish itself as a pioneer of a successfully developed hydrogen economy.

All project partners are determined to seize this important opportunity, not only for the companies involved, but for the Saarland as a whole.

The energy company STEAG, the energy technology company Siemens Energy, the grid operator Creos Deutschland, the Saarbahn public transport company, and the SHS steel companies (Stahl-Holding-Saar with its companies Dillinger and Saarstahl) developed a joint project idea aimed at establishing a cross-border and prospectively green hydrogen economy. Together, the project partners submitted an application to the German Federal Ministry for Economic Affairs and Energy for funding of the project as an important hydrogen project of common European interest – IPCEI for short.

The projects in detail

The mosaHYc project, jointly undertaken by the distribution grid operators Creos and GRTgaz, aims to use an existing gas infrastructure to develop a cross-border high-pressure grid for the transport of hydrogen. The aim is to create infrastructure is a of 100 kilometers that will enable hydrogen producers and consumers in the “Grande Région” to develop business models in industry, the heat market and the transport sector. Account has to be taken here of the interplay between the various pipeline sections in the Völklingen (Germany), Carling (France), Bouzonville (France) and Perl (Germany) area in the Saarland and in France, as well as safety aspects. In the context of a feasibility study, the existing pipelines are being examined and prepared for conversion to hydrogen. In addition, it is being examined to what extent an existing pipeline route between Völklingen and Saarbrücken can be used for the transport of hydrogen.

The HydroHub Fenne project (2 x 17.3 MWel or 664 kg H2/h, equivalent to approx. 5,800 t H2/a) pursued by STEAG and Siemens Energy, which has already been selected as a “Living lab for the energy transition”, is to be the first PEM (proton exchange membrane) electrolysis plant of significant scale. The plant is to be built in Völklingen in the Saarland on the site of an existing STEAG power plant, taking a brownfield approach and making continued use of existing structures without any far-reaching changes or environmental impact. The plant will use electricity from renewable sources (“green electricity”) for electrolysis, producing green oxygen and green hydrogen. The green electricity will be partly generated by STEAG in its own plants, e.g. by STEAG New Energies or STEAG Solar Energy Solutions, or procured on the market via green power purchase agreements (“green PPAs”).

Unfortunately, the Saarbahn project TraficHdeux was not selected in the IPCEI procedure. Nevertheless, Saarbahn is holding on to its strategy of converting 60 % of its bus fleet to fuel cells as an alternative drive system by 2030. To achieve this, the Saarbrücken transport company is counting on the announced funding from the Federal Ministry of Transport.

The “TraficHdeux” project initiated by Saarbahn aims to build up the infrastructure for operating cross-border public transport with hydrogen-powered fuel cell trains and buses. The core of this project is the reactivation of non-electrified or only partially electrified rail lines across national borders. In addition, the construction of a filling station infrastructure at the STEAG power plant site in Völklingen is planned. The bus fleet is also to be converted to zero-emission operation as quickly as possible. By 2030, Saarbahn will have to replace around 85 solo and articulated buses. The majority of these are to be procured as zero-emission vehicles. In addition, a small-scale electrolyzer is to be installed to ensure supply until the connection to the mosaHYc pipeline is completed. In order to make optimum use of the excess capacity available during the start-up phase, the filling station is therefore also to be made accessible to other municipal companies and commercial users.

The Saarland steel industry, with the companies Dillinger and Saarstahl, plays a key role as an industrial consumer in the strategic development of the regional cross-border hydrogen value chain. Use of hydrogen is required to reduce emissions from processes in the steel industry. Within the scope of the “H2SYNgas” innovation project, a technology is being developed at a blast furnace operated by ROGESA Roheisengesellschaft Saar mbH, a joint subsidiary of Dillinger and Saarstahl, which will enable the use of the company’s own process gases and, in addition, substantial quantities of hydrogen for the blast furnace process. The synthesis gas generated from the company’s own process gases will be enriched with hydrogen. This hydrogen-rich mixed gas will then be used as a reducing agent for the reduction of iron ore, replacing coke in the blast furnace process and thus avoiding CO2 emissions. Following the coke-oven gas injection system already installed at the blast furnaces in Dillingen in 2020, SHS – Stahl-Holding-Saar is set to take the next step on the road to CO2-neutral steel production in the Saar region by implementing this new innovative technology.