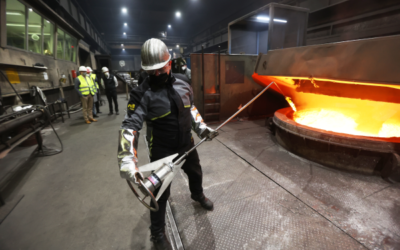 Foundry and smelting systems typically have a long service life because they produced in high quality and are serviced regularly. Therefore, it makes economic sense to think about modernization of the system. This provides a longer service life and more efficiency. If customers are faced with the choice of making a new investment or modernizing, the ABP experts offer detailed advice. The concept of sustainability plays a significant role  an aspect that ABP Induction has been focusing on for many years. It now has even more potential thanks to the possibilities offered by digitalization.

With the modernization of systems, both ecological and economic, as well as social aspects can be taken into account: “It’s about reducing emissions, reducing energy demand, increasing output and productivity, and simplifying work processes for employees, while increasing occupational safety,” summarizes Yilmaz Yildir, Vice President Service Sales at ABP Induction, “and it’s still not uncommon for systems to run 25 years or more in foundry operations nowadays. That’s also something that has to be taken into account.” When foundries utilize older systems, they are often faced with two alternatives: Use the existing system to its end by performing simple maintenance and then replace it with a new system, or extend its life through effective modernization while maintaining or even increasing productivity.

In a high-wage region such as Central Europe, where systems are usually state-of-the-art, investment is a crucial factor.

“In many cases, systems in low-wage countries also have a more simplistic design, do not contain certain components, or do not contain them in the same high-quality configuration as in the major industrialized nations – which is, of course, sometimes due to demands in terms of efficiency and productivity. The business value of a system in Central Europe is also certainly different from that of other regions,” says Vice President Sales Yilmaz Yildir.

As such, at the beginning of a customer process, the main thing is to determine the customer’s needs, he says:

“This is an intensive analysis and consulting process. For instance, the customer may want to make such a big leap in technology that this cannot be achieved with the existing system, even through modernization, in the case, we would advise a new system. In all other cases, we point out modernization alternatives.”

Modernization as a serious alternative

Certain aspects of modernization make it a serious alternative to new system: “Older systems can be quickly upgraded to comply with the latest state of the art and achieve close to the original productivity with the further development of components and parts – or even beyond, if new components make technological leaps possible, for example, by adapting the process or process technology for more productivity.”

There are several ways to modernize systems: “A new converter, for example, is a targeted investment to maintain existing equipment, enabling systems to continue operating at high efficiency.” Systems in themselves inevitably age. The aging process and efficiency sometimes depend on the intensity of maintenance, and the continued operational readiness of systems also depends on the availability and recycling of spare parts. The keyword is circular economy. “System technology can be brought up to date at regular intervals – in many cases, it is worth investing accordingly,” says the service expert.

ABP experts attach great importance to the control and power supply of an system when it comes to retrofitting. In ABP systems, the PLC (programmable logic controller) regulates aspects such as sequence, cycle time, material feed and much more – “it is truly the heart of the system,” explains Yilmaz Yildir. As part of a modernization, the situation of the system is examined and the necessary scope is defined. It may be worthwhile, for example, to modernize the control system together with the operating elements, which have of course also undergone a development process and have been significantly improved in terms of operability.

“When it comes to old system, you have experienced operators, some of whom have been operating the annex since it was purchased. Transferring this specialist knowledge to the younger generation, who have grown up in the age of smartphones and social media, is a complicated and sometimes daunting task. In a sector that is suffering from a shortage of skilled workers, it is particularly important to incorporate modern, intuitive operation via touch screen and thus significantly improve user-friendliness,” says Yilmaz Yildir. Put bluntly: Whereas operators used to have to press ten buttons, today one touch switch is all that is needed, he says.

Another important component is the inverter control unit, or DICU for short. It controls all the necessary functions in the inverter. The current version DICU3 has been installed in new systems since 2017, and since 2018 it has also been available for modernizations. “The DICU3 is M2M-ready, so that error analysis is possible via remote service. This has made customer systems become Industry 4.0-capable,” says the expert. With the DICU3, ABP wants to ensure that customers can use their melting plant economically and reliably for as long as possible.

The DICU3 offers a high level of operational reliability. Self-testing processes before starting the system help to prevent major damage and failures of the power supply. Due to fast and improved controls, power supply runs in a more stable manner, which leads to more flexibility at the periphery, such as transformer design, as well as to fewer failures and downtimes at the overall system. . Predictive maintenance can be used to monitor systems and read trends, so that a dialog can be entered into with the operator before defective components and thus failures of the system occur.

Modern components are therefore also good arguments in terms of topics such as work and failure safety. This is also true for the serviceability of a system, especially with regards to remote service, as offered by ABP with digital Expert on Demand (dEoD). “The future of foundries will be defined by digitalization, and it is precisely the possibilities of digitalization that will give foundries a future,” the ABP expert is certain. Digitalization enables plant operators to optimize their own system selectively.

The digital portal myABP is the open platform that acts as a manufacturer-independent tool and communication center for this purpose. This platform can be used by ABP’s own apps as well as those of other suppliers. Via ABP Intelligence, ABP offers various apps for monitoring and optimizing systems.

“If you want to achieve such an increase in efficiency, systems must of course first be Industry 4.0-capable and undergo further development in this direction. This is also an important aspect to be taken into consideration when modernizing a system,”

To this end, ABP has developed the Industrial Remote Circle with the components myABP Portal, dEoD and Scalance network components from Siemens.

In view of the growing megatrend of decarbonization, it pays off for ABP Induction to have focused on the topic of digitalization of foundries. “We are currently receiving many inquiries from operators regarding environmental aspects such as efficiency and CO2 reduction. The question of how to increase a system’s productivity while saving energy. Reducing emissions is a key question on the market, and we have the right answers with our concept,” explains Markus Fournell, Vice President Digitalization & Service Products at ABP Induction.

Not only the need for CO2 reduction, but also the price development on the energy market are key drivers. “Companies are now realizing that they need to take action to save energy, increase productivity and become more environmentally friendly. They can do this without investing in a new system, but precisely by modernizing and digitalizing it.”

Controlling metallurgical processes with FoundryCloud on the ABP Gateway

This is where ABP partner ZORC Technology comes into play. For example, by developing the FoundryCloud app and using it via the ABP Gateway. This new software for controlling metallurgical processes stores the foundry’s operating parameters. It also sends empirical and AI-based suggestions for optimizing production directly to the employees. By continually documenting the operating parameters, a steadily growing data set is accumulated with each casting. This happens thanks to the software from which subsequent casting operations in the metallurgically process benefit.

“After all, simply collecting data and showing it on a display is not enough. I have to get the system to a state where the right data is collected and conclusions can be drawn from this data,” says Wolfgang Baumgart of ZORC. From this data, information would have to be made available to users, which would then enable handling instructions, guiding the user in their work, so to speak.”

But these answers must also reach the operating companies at management level and be supported.

“Digitalization makes a lot of things possible, but the management of each individual business must be on board with this vision – it is the enabler in the business.” A new development here is that management boards are using the possibilities of digitalization to obtain a basis for decision-making. Processes within an operation can now be digitally simulated in advance. “This is a new capability that ABP and ZORC have developed. Calculations in a large plant context used to be rather time-consuming and sometimes inaccurate because not all options and potential data were available. This has now changed, because you can exchange costs, aggregates, expansion stages or components in the simulation as you wish and thus show cost and yield structures depending on the situation.”  The realistic goal: lower energy costs with higher productivity.

Industry 4.0 ready: “This topic must become a priority in the foundry world.”

He adds that this is also a question of corporate culture and communication: “After all, it’s not about replacing employees – this is something that always has to be communicated in digitalization projects. The operator has to accept that the computer is there to make him or her better. It’s like a giant planning game that the computer can simply do better,” explains Wolfgang Baumgart from ABP partner ZORC.

“The complexity makes the difference here: Think of an orchestra, where many capable individualists have to form a unit. Everything has to take place in the right place at the right time, and that also applies to a foundry operation,” says Markus Fournell, “and the likelihood of a human being mastering this planning game better than a machine is  very unlikely.”

“The buzzword Industry 4.0 has long since arrived in the foundry industry, of course, but we are also in the process of filling this buzzword with life. After all, we map this with digital tools such as FoundryCloud from our partner ZORC, through which all components can be simulated in their interaction and behavior with a digital twin. Priority must be given to the topic of Industry 4.0 in the foundry world,” says Yilmaz Yildir.