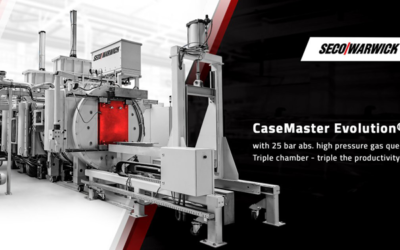 Last year, the Dutch branch of Aalberts Surface Technologies Heat (formerly Hauck) in Eindhoven received a furnace, operating under high vacuum, with the working chamber of 1,200 x 1,200 x 2,000 [mm], which is not only the largest furnace with all-metal heating chamber, but also the largest device of this kind to be operated in the Benelux region. Now the Polish, Kalisz-based branch of the heat treatment systems and services provider will expand its production line getting a solution that can only be described with “the most” prefix.

The new furnaces will create a production line that will be used for successive vacuum carburising (LPC) and gas quenching (CMe-T furnace), followed by annealing (BREW furnace) to reduce the internal stress of the treated metals. Performing so many processes is possible thanks to the combination of vacuum technology with atmosphere technology.

The three-chamber CaseMaster Evolution-T is a huge furnace with a capacity of 1 t per batch and an output of up to 2,000 t/a of parts. Such a device can successfully replace three conventional atmosphere furnaces. It is interesting to note that this furnace has an incredibly fast cool nitrogen chamber, achieving results similar to helium and oil cooling, creating an ultra-environmentally friendly system. By using the nitrogen taken from, and discharged to the air, it eliminates both the use of expensive and difficult to obtain helium, and harmful quenching oil. This makes it possible to reduce CO2 emissions by 300 t/a. This is exactly the amount generated by three standard atmosphere furnaces.

“Aalberts had special requirements regarding the components and solutions used, and thus a T-series CaseMaster Evolution  will replace the existing semi-continuous processes under protective atmosphere followed by oil quenching with complete vacuum heat treatment with low pressure carburising and nitrogen quenching (25 bar!), delivering process precision and repeatability, and will probably be the quickest cooling furnace in the field with nitrogen quenching,” explained Maciej Korecki VP, Vacuum Business Segment at Seco/Warwick.

On the other hand, the BREW 6810 solution will make it possible to perform the annealing process immediately after vacuum carburising. It is a versatile furnace that can operate between 300 and 750 °C. It is equipped with a system enabling treatment under nitrogen atmosphere, preventing oxidation on the heat-treated workpieces.

The CMe-T furnace can replace the existing lines and atmosphere generators used for mass heat-treatment under protective atmosphere and oil quenching, whereas it ensures higher precision and process repeatability. The solution stands out, not only thanks to three chambers, but mostly to the improvement of process quality results and cost reduction, twice the capacity and increased production flexibility with a compact design. The safety and environmental neutrality guaranteed by the CMe-T furnaces has become more and more important. These are among the key reasons for choosing a CMe-series furnace.

The BREW 6810 is a versatile furnace for annealing after vacuum carburising. Its huge advantage is the turbo cooling — forced cooling system — which makes it possible to significantly shorten the annealing process. The combination of these two technologies, that is vacuum carburising and annealing under a nitrogen protective atmosphere, ensures a comprehensive solution where the heat treatment method required for both processes can be performed immediately one after another.

Both companies have been working together for many years now, increasing the production capacity of the individual branches of Aalberts Surface Technologies Heat. After Eindhoven, it was high time for the Polish branch of this global heat-treatment company to upgrade.

“According to our mission statement ‘Best-in-class’ is not about our core technologies but about our commitment to do everything we can to make our clients successful”, said Wojciech Matczak, Plant Manager in Aalberts Surface Technologies Heat Kalisz. “Our partner shares a similar mission, delivering to their customers reliable, safe and environmentally-friendly heat treatment solutions that ensures the economic efficiency of their business.“

“Another solution delivered to a demanding customer, operating globally — in as many as 150 locations around the world — makes a great recommendation for the Seco/Warwick Group, emphasising our trustworthiness as a partner and testifying to the quality we achieved on the international market”,  added Sławomir Woźniak, CEO Seco/Warwick Group.