ECM receives key orders for the Flex system in Germany 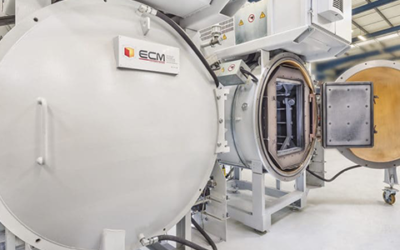 Indeed, within an industry facing strong transformations, it had to strongly reduce its CO2 emissions to keep producing parts for certain car makers. Neapco invested in the Flex system for vacuum carburising. It allowed the customer to reduce by 23 % its Düren factory total CO2 emissions (25 % saved on the heat treatment shop and a 81 % reduction on a one to one comparison : ECM Flex system for vacuum carburising vs existing atmosphere carburising furnaces).
Another key order has been placed by a hydraulic pump manufacturer, which also invested in a Flex system. However, the rationale behind this investment dealt with the flexibility of ECM Technologies’ furnaces. Indeed, the modular dimension of the Flex system has retained customer’s attention, especially since the furnace is built as standard with the possibility to further expand its capacity, and/or to welcome a high level of automation with robots, AGVs, vision systems and other 4.0 elements.
In addition to modularity, several processes can be handled in the Flex furnace like low pressure carburising (LPC), vacuum tempering and a combination of vacuum sintering followed by hardening.