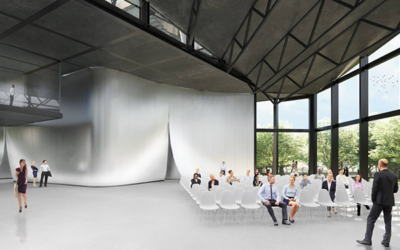 29.04.2021. Ukraine’s largest mining and metallurgical company, Metinvest, is reviewing proposals for the construction of the country’s first non-state technical university. Applications have been received from different Ukrainian cities, including Mariupol, where it was initially planned to build the Metinvest Polytechnic campus.

Decision to change the location

The decision to change the location for the construction of the university was made by Metinvest Group’s management on 14 April. It was  originally planned to build on the site of an abandoned summer cinema, which is privately owned by the Group and outside of the City Garden. The construction of the building would not have affected the park itself, but could have spurred the development and redevelopment of the surrounding area.  The Group respects the opinions of Mariupol’s community and understands the wish of local residents to preserve the present appearance of the old part of the city.

Land plot near Mira and Svobody

The Group adheres to the key principles of sustainable development, constructive cooperation and mutually beneficial partnership with the community. Metinvest has received an offer, signed by members representing all of the parties in the Mariupol city council to allocate a land plot near Mira and Svobody squares for the construction of Metinvest Polytechnic. The city council members have provided assurances that this proposal reflects the opinion of the wider community. The Group hopes that, if this location in Mariupol is chosen, there will not be any concerns about the conditions for the construction of the university in the city.

Metinvest Group is grateful to the city for its proposal. On the whole, this site in the city centre is attractive for a major educational project. In the near future, all of the necessary studies of the area will be carried out according to Ukrainian  law. As soon as the expert study and its conclusions are available, the Group will be able to make a final decision taking into account all of the proposed locations.

It is important that this new institution of higher education should not be a subject of social or political contention. A modern university is a fresh opportunity to strengthen any city’s development agenda and reinforce Ukraine’s position in higher technical education. Therefore, the Group expects Metinvest Polytechnic to become a unifying factor for society and a primary attraction for the chosen region.