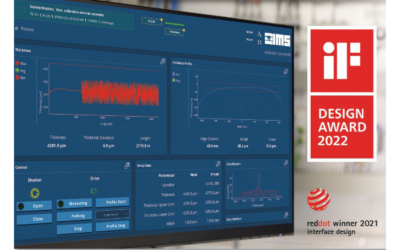 To win the world-renowned iF Design Award is a very special distinction, of which IMS Messsysteme GmbH can now also be proud. Already crowned with the Red Dot Design Award in 2021, the MEVIweb human machine interface developed in-house recently received another prestigious honour in the form of the Industrie Forum Design.

Since its launch last year, customers of the world market leader IMS Messsysteme GmbH, headquartered in Heiligenhaus, North Rhine-Westphalia, have benefited not only from the high-performance measurement technology, but also from a future-oriented control and regulation software, which has impressed two independent juries particularly with its user-friendliness.

MEVIweb is the name of the control and regulation software developed in-house by IMS Messsysteme GmbH, which is a logical further development of the MEVInet automation system that has proven itself over many years. The new HMI is based on the latest technology standards – focussing on the user and their individual requirements – and also takes into ac-count the specific requirements and environmental conditions of the primary fields of applica-tion in rolling mills.

As a logical consequence, MEVIweb is designed as a freely configurable software solution that can be programmed using an HMI editor to meet specific customer and measuring sys-tem requirements. Operators of IMS measuring systems have a clearly structured overview of the most important analytical data of their measuring systems at all times on the modern-looking user interface.

Thanks to the modern information design and clear visual feedback of the status, the user has a precise overview of the status of the individual systems and can evaluate the extensive amounts of data quickly and easily. In addition, a fold-out control panel provides direct ac-cess to basic system functions so that the user can respond immediately to a changing sys-tem status.

Initial reports from users of the MEVIweb HMI for measurement, control, regulation and visu-alisation, and thus for quality management, have been positive and confirm the theoretical advantages of the new user interface in practical applications. Users particularly appreciate the speed and the browser-based, clear and variable presentation of data by the software, which, incidentally, can also be used on mobile devices.

Overall, the usability of the innovative MEVIweb control and regulation technology convinced the two independent juries and the first users alike with the following criteria: