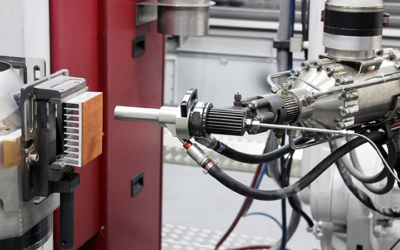 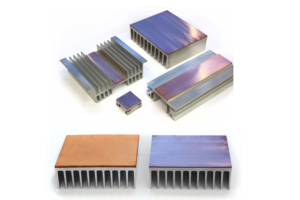 The most common way to cool devices has been air/liquid cooling using a heat sink. Conventionally, copper and aluminium heat sinks are used in the combination with such cooling systems. Copper is always a preferred choice for heat sinks due to its cooling capacity superior to aluminium; however, copper‘s weight and cost limit the size, especially for large electronics systems. Whereas due to lower thermal conductivity, aluminium heat sinks do not spread the heat quickly enough; thus, a large surface area or taller fins are required, which is not a plausible option in many cases.

Moreover, a problem arises if a heat sink is substantially larger than the integrated circuit devices it resides on. If the electronic device generates heat faster than the heat sink spreads, portions of the heat sink far away from the device do not contribute much to heat dissipation. In other words, if the base is a poor heat spreader, much its surface area is wasted. Furthermore, to connect the aluminium heat sink with electronic devices, a thermal interface material is generally used because soldering of aluminium with direct bond copper of the electronic device is difficult. Typically, this material has a very low thermal conductivity, affecting the overall aluminium heat sink‘s performance.

A hybrid heat sink, combining the thermal benefits of copper with lightweight aluminium presents an exciting alternative to overcome the issues associated with conventionally available copper and aluminium heat sinks. In such a concept, the portion of the heat sink that comes in contact with the electronic device is made of copper, while the other portion is made of cheaper and lighter aluminium. However, joining aluminium and copper is a difficult challenge. Soldering and brazing is commonly used to join aluminium with copper in industrial refrigeration, air conditioning, and heat exchangers. However, there are many issues associated with soldering and brazing, such as corrosion at the interfaces and solder materials with different electrical resistance and thermal expansion mismatch.

The cold spray (CS) technique is an innovative solution to join copper and aluminium and overcome the issues associated with soldering and brazing. The CS-process is known to deposit the powder particles in solid-state far below the materials‘ melting point; thus, it can avoid common temperature-induced problems such as high-temperature oxidation, thermal stresses, and phase-transformation. Cold spray is a powder-based technology in which micron-size powder particles are accelerated in the supersonic flow of a compressed working gas through a de Laval nozzle. These powder particles impact the substrate, plastically deform, and create bonding with the substrates. CS offers short production times, virtually unlimited component size capability, and flexibility for localised deposition.

The Impact Innovations ISS 5/8 cold spray system and cold spray grade Impact’s copper powder (iMatP_Cu01) were used to produce hybrid heat sinks. A copper layer was deposited on a base plate of a commercially available extruded aluminium heat sink (as shown in Fig. 1). The thickness of such a copper layer can be adjusted to the electronic devices‘ design and operational temperature. 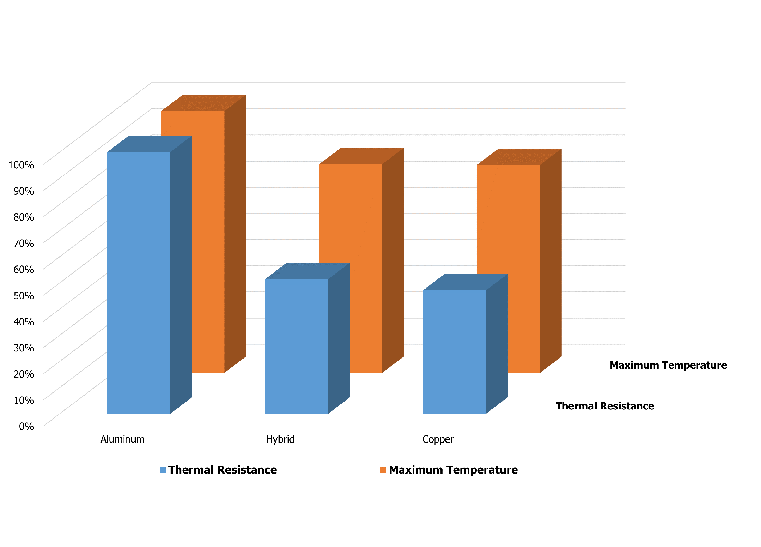 When discussing a heat sink‘s performance, its cooling capability is typically quantified in terms of the thermal resistance, a measure of the temperature rise above ambient on the top of the device per dissipated unit of power. The lower the value of thermal resistance, the higher is the cooling ability of the heat sink.

These results show that the copper and hybrid heat sinks have almost identical thermal results and outperformed the aluminium heat sink in a substantial fashion, thus showing the importance of quick heat spreading along the base. At the same time, the hybrid heat sink weighed and cost less than the copper heat sink.

Indeed, hybrid heat sinks manufactured by cold spraying have slightly higher production cost than commercially available aluminium heat sinks; however, adding a layer of copper on an aluminium heat sink decreases its thermal resistance by 48 %. This has a direct effect on the production costs since the semiconductor area can be decreased by 94 %. Besides, the deposition efficiency and deposition rates of copper powder by the cold spray process are 95 % (including overspray) and 10 kg/h, respectively, indicating the potential of the CS-process to realise a cost-effective large-scale industrial production.