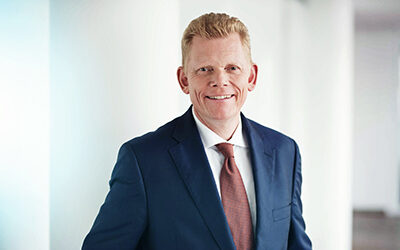 Guido Kerkhoff has taken over from Gisbert Rühl as Klöckner CEO as planned. Photo: thyssenkrupp

17.05.2021. Guido Kerkhoff has taken over from Gisbert Rühl as CEO as planned, effective 13 May 2021. He also presented the new corporate strategy “Klöckner & Co 2025: Leveraging Strengths” at the Annual General Meeting. This strategy will increase Klöckner & Co’s sales and profitability significantly by 2025. The company aims to use its pioneering role in digitalisation and substantially optimised cost structure to accelerate customer growth, expand its own product and service portfolio comprehensively and grow its partner network. With this strategy, Klöckner will evolve into the leading digital platform for steel, additional materials and processing services in Europe and the Americas.

Guido Kerkhoff: “With our new strategy ‘Klöckner & Co 2025: Leveraging Strengths’ we are again focusing on sustainable growth. As a digital pioneer in the steel industry, we have spent the past years building clear strengths and competencies, which we will now leverage in a targeted manner to take Klöckner to the next level. To achieve that, we will invest in our employees and our digital transformation.”

Two strategic initiatives will help accomplish these goals. Klöckner will drive additional digitalisation and automation measures, while also focusing on operational excellence. Consulting expertise in materials and processing as well as an agile corporate culture also form an important part of the foundation for the Group’s successful development.

Following the successful digitalisation of the customer interfaces, Klöckner will focus on automating internal processes in the next phase of its digital transformation. The aim is to link the physical and the digital side of the business more closely, thus greatly reducing manual interventions along the value chain (zero touch). This will also involve pooling key Klöckner digital and IT competencies under the roof of kloeckner.i, bundling them under one management and linking them more closely with the operating business. In addition, kloeckner.i will be building up a second innovation hub in the USA to better fulfill the local requirements for digitalising the business. Moreover, Klöckner will intensify its focus on operational excellence to be able to offer customers the most efficient solutions and the best service. Automation, increased cost, and process transparency as well as leaner administration will further enhance profitability.

With the new strategy, Klöckner will again grow, primarily organically and above market level. The strategic measures will also improve performance substantially across the entire economic cycle. The company’s target is to more than double the pre-pandemic level of its normalised operating income sustainably by 2025. In addition, the company plans to achieve a positive value contribution, so that the return on capital employed (ROCE) exceeds the cost of capital.

Changes on the Management Board

Guido Kerkhoff, who has been responsible for the operating business in Europe as Deputy Chairman of the Management Board since the beginning of September 2020, has been appointed by the Supervisory Board to take over as CEO of Klöckner & Co SE as of the close of the Annual General Meeting as planned. He succeeds Gisbert Rühl, a member of the Management Board since 2006 and CEO since 2009.

Gisbert Rühl: “Over the past years, Klöckner & Co has evolved from a traditional steel distributor into a digital pioneer. I am proud of everything our team has accomplished. Guido Kerkhoff and I have spent the recent weeks and months paving the way for a seamless transition at the helm of the company. I am fully confident that Guido Kerkhoff will bring new momentum to the company that will successfully build upon everything we have achieved so far. I would like to express my gratitude for the good cooperation and the longtime support of the Supervisory Board and the entire workforce. I wish Guido Kerkhoff and the company every success in the future.”

Prof. Dieter H. Vogel, Chairman of the Supervisory Board of Klöckner & Co SE:

“Klöckner says farewell to a leader who has shaped the company for more than a decade and a half. With his courage and innovative spirit, Gisbert Rühl has laid a strong foundation for the future.”

In addition, the Supervisory Board has appointed Mr. Bernhard Weiß to the Group Management Board of Klöckner & Co SE as Chief Executive Officer Europe (CEO Europe), effective 1 June 2021. In this role, he will be responsible for the EU activities (Austria, Belgium, France, Germany, the Netherlands). For the past several years, Bernhard Weiß has been CEO of the French country organisation, where his accomplishments include a successful restructuring. Before joining Klöckner, he served as CEO of Yara International in Africa for approx. three years. He also held various international executive roles at Siemens. To better integrate operations, he also takes over the management of Klöckner & Co Deutschland in addition to France.